Joe was approached to turn his unique brand of magic into a TV series. The result is the hugely popular TV show - abraKIDabra.

Each episode opens with Joe up to some magical mischief either in his dressing room or out on the street. Next he performs a trick in front of a live audience and the hilarity ensues!

Then it's the 'Teach a Trick' segment. Joe brings two young apprentice magician into his magical workshop and teaches them a very clever magic trick. He reminds them to keep practicing as they will be performing it in front of a live audience.

The 'Put on a Show' segment sees the two young apprentices perform their trick in front of a live audience.

The show airs daily on RTEjr and is available on the RTE player and on the free RTEjr App. 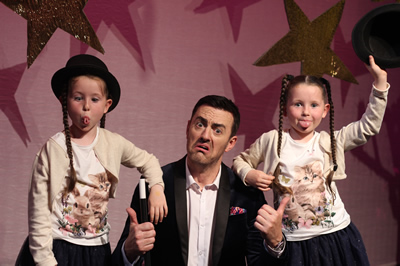